Well that’s not strictly true, I love Amsterdam and I love Chris but football stadiums…. Not so much!  However Chris loves football and I promised if we ever went anywhere that had a stadium and we had the chance to go, I would go with him.  He does so much for me, how could I say no.  This blog is co-written by me and Chris, as you know I don’t have a clue when it comes to football.  I agreed to write this blog as we visited this stadium so could not miss it out but only with Chris for the football technicalities.  LOL!
We were at The Anne Frank Museum and then we were heading off to the Johan Cruijff Stadium.  This was one of the four original tickets we booked before we left the UK.  We jumped on the first tram going in the direction of Amsterdam Central Station, where we could get the train directly to the Stadium.

We arrived in about twenty minutes so all in all not a long trip, which is good.  Amsterdam is a very accessible place and has the best travel links.  We walked to the front entrance to the reception area to get our tour tickets and were directed to an area which was the entry to the stadium.

The tour began in the dressing rooms of the away teams.  From there we moved to the media area, this is where the team are interviewed before and after the game. 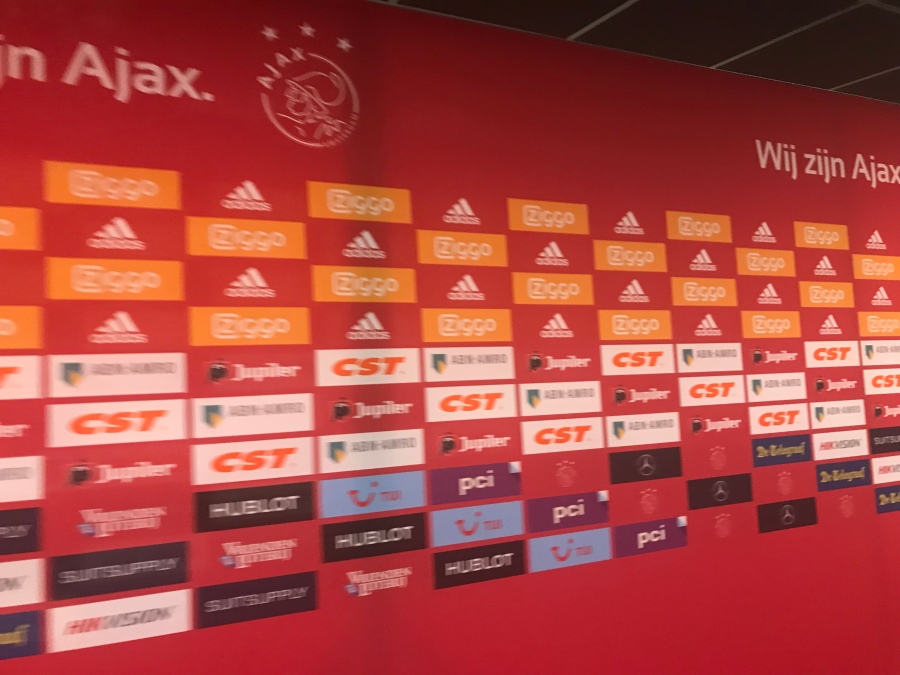 Next was out onto the sides of the pitch.

I can remember looking out over the vast area we were stood in, thinking how massive this place is and how many people it would take to fill it as our home team Hull City KCOM Stadium has a capacity of 25,500 people and this was huge compared to it seating 53,748 according to Chris and his massive sports memory bank.  (Plus google a bit LOL!)  We were not allowed on the pitch itself which I find disappointing but there is a reason why? So it does not get damaged!!  OK I see this!

From here we went to the home teams dug out!! This is where the players sit while the game is playing for those of you who like me don’t have a clue about things like this.  Then to the away teams dugout, just next to each other.  We were directed inside to watch a short video showing how it is possible for the stadium to be prepared for a concert.  They actually take up the turf and then relay after they concert has finished.  It is beyond fascinating to watch the whole process on fast forward.  From memory it took two or maybe three days from start to finish.

Next was a climb to the top of the stairs on the stand for a seat in the press area, and an amazing view across the stadium.

We went to the press conference room for a picture opportunity.  This is where the managers give the pre and post match interviews.
Next was a quick look at the cctv room. (very important for the security of the stadium and the fans)

Then onto the trophy room where Chris spent an age looking at all of the trophies Ajax have won including the European Cups and domestic trophies.

Finally there was a Wall of Fame which is a row of seats and above these are the names of past players of the team.

We said our goodbyes and thanks to the guide and headed off.  For one last photo opportunity outside was a statue of Bobby Haarms who is Dutch professional football player and coach.