As you will know my family mean a lot and we all try to spend as much time together as we can so when celebrations come up such as Halloween and bonfire night we do like to try to get together as a family and do something. This year we decided to celebrate Bonfire Night together.

If you don’t really know what bonfire night is, its a traditional celebration, mainly in the UK. It’s called Guy Fawkes night or bonfire night.  It’s celebration on the 5th of November and it was based around Guy Fawkes who had a gunpowder plot to blow up the House of Lords he ended up failing and got prosecuted for treason. We all celebrate with lots of fireworks and bonfires twice but different apart from we had two different nights as some of the family love fireworks and others do not.


I thought I would tell you a bit about it so Saturday the 3rd of November it’s not bonfire night but we’re all off work so got together with Chris’s brother and family for drinks pies and peas.  Claire usually makes chilli but we asked if she would do pie and peas.  It reminds us of when we were kids and our grandparents used to do pie and jacket potatoes for us. They used to cook potatoes in tin foil in the bonfire and when it died down the potatoes would be cooked to perfection.  Nowadays we have all become very safety conscious and put the potatoes in the oven even though no one got burnt in the old days when they were on the bonfire.

Chris and Dave picked me up after the football, they were all happy because they won against West Brom.  I was actually ready well nearly lol and off we went to Dave’s.  Theo and Louise don’t like fireworks so they would not come but we were to go there on Monday which is actually the 5th of November bonfire night anyway.  It was already dark.

David built a bonfire and Claire was busy in the kitchen cooking chilli and rice, hot dogs, pie and peas, chips. All the drinks were chilling in the fridge, although it was so cold outside we could have put them outside to cool.  Everyone should have arrived by 6:30 but then you know what family are like. Most are on time but mother and father-in-law were late.  Oh! we thought you said after 6:30.  Finally everyone arrived on the celebrations could start.

Dave lit the fire and the family began deciding which fireworks they wanted to light first, rockets, air bombs, Catherine wheels, sparklers ,you name it we had it.  The kids loved the noisy ones, the older members of the family like the quiet ones lol!  Half way through the night, it was time for a food break.  Claire dished out all manner of yummy delights from many prepared dishes.

Although, I must say no onions on hot dogs not acceptable!! lol!! Onions on hot dogs it’s a must! With a belly full of chilli and hot dogs outside we went for part two of the fireworks and bonfire the fire needed stoking as we let it burn right down.

Again more air bombs rockets and those cute little fizzy fireworks that don’t really do much just sizzle for about 10 seconds then died out.  The actual fireworks lasted about an hour and a half. 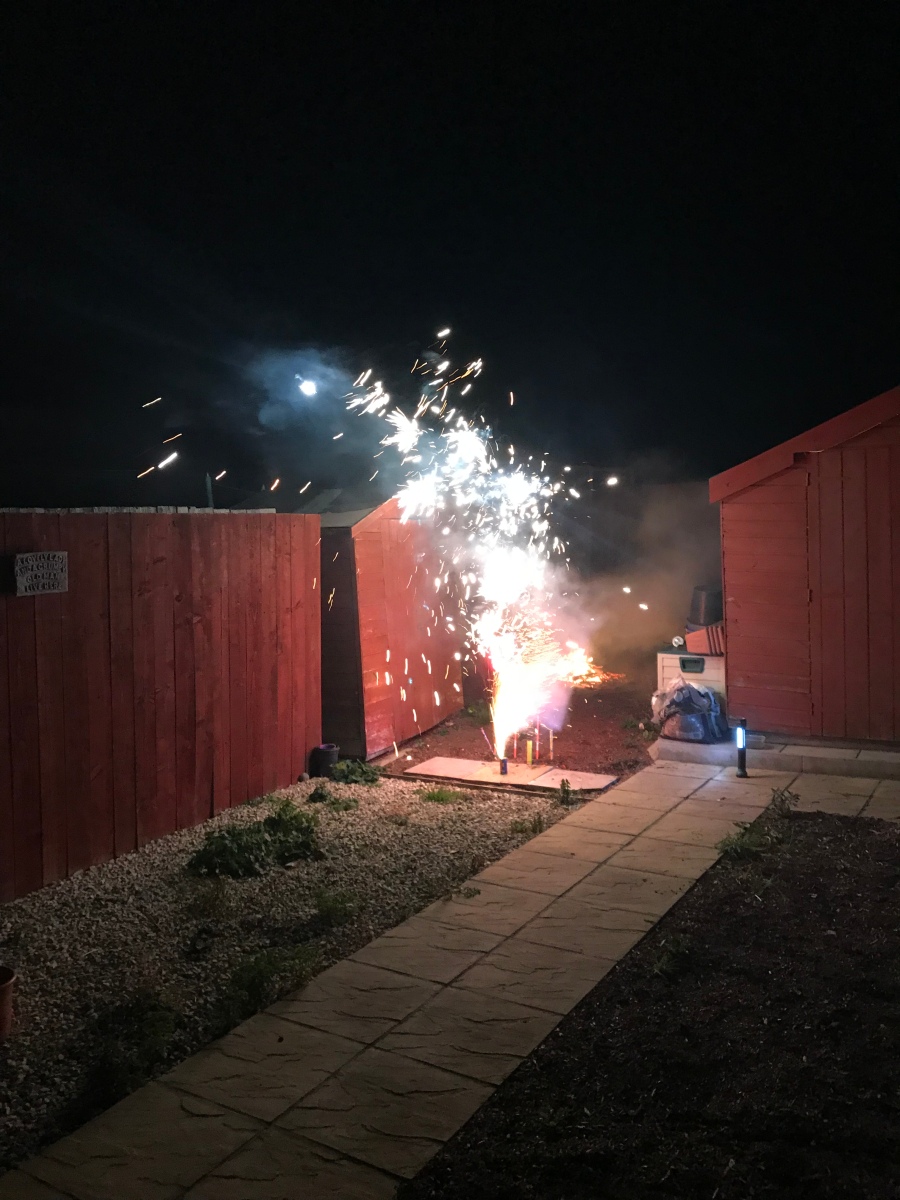 That was a lot of fireworks. A couple of drinks and we were ready for home. Chris and I got a lift down so he could have a couple of lagers so it was bus home for us. We timed the bus perfectly and within half an hour we were safely home showered and tucked up in bed with a lovely sleep in on Sunday to look forward to.  Sunday and Monday came and went.  Then it was round two, a bonfire night which was actually on the right day November 5th.


Theo doesn’t like fireworks and Louise hates the Bangs so  they were having a few family and friends and food and fire instead.   We rushed home from work, had a  quick shower changed and straight back out again. Arriving at Louise and Mikes about 6:15. We were among the first to arrive for a change. The food smelled delicious, weirdly chilli again. Pulled pork, hot dogs ,again no onions! What is it with no onions?  The drinks were chilling but not  for us though as it was a work day.


The kids were all running around in the garden having fun and then the fireworks started from around the neighbourhood.  I’ve never seen the kids move so quick house and tipped out so many toys into the living room it looks like the remnants of a LEGO / toy shop. They were all happy and all the adults were outside around the fire just kept popping back in. We make sure one of us was always in the house with the kids. After we had fed all the kids, we started dishing out the potatoes and hot dogs and chilli which, was in the slow cooker on the bar.  Mike was in charge of the drinks but obviously disappeared when the fire started as always.   The men were down by the fire and the  women were up near the kitchen so we thought we’d give them a change.


So the women went down to the fire and the men came back up to the bar and started to take care of the kids for a while.  After about couple of hours we decided it was time to go as it was an early start the next morning but all in all another great night. One spent with family and friends and people who don’t see very often.  Yes, we mean you Dion! So the next celebration is going to be Christmas and  hopefully we’ll have a few stories to tell you about family life, fun and friends then. OK bye for now! Although come back soon for more tales of love, life, family and travel.
I am sure we will have more stories to write before Christmas.
Loving being me.
Thanks for reading and we hope to see you again soon.
Love The Go To Girls Blog xxx

11 thoughts on “The Go To Girls Blog loves Bonfire Night……..”